Training is better than management.

Management means people can get pictures like these . . . (which are great - thanks to Sandra Tung!) 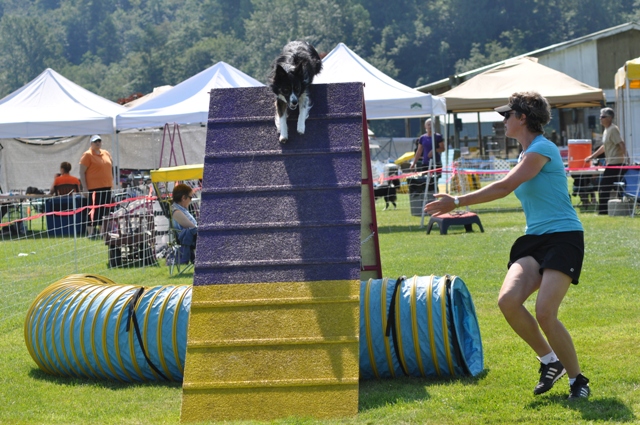 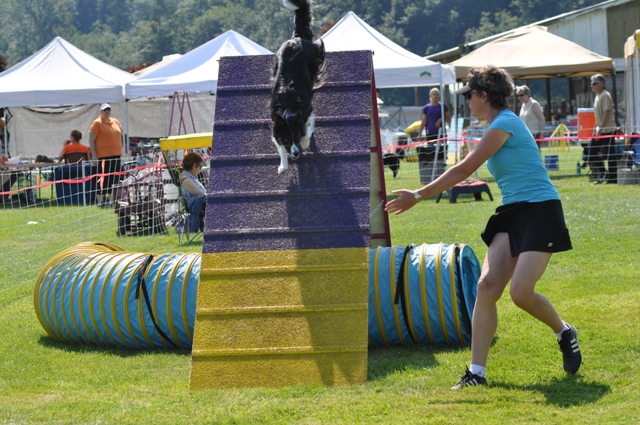 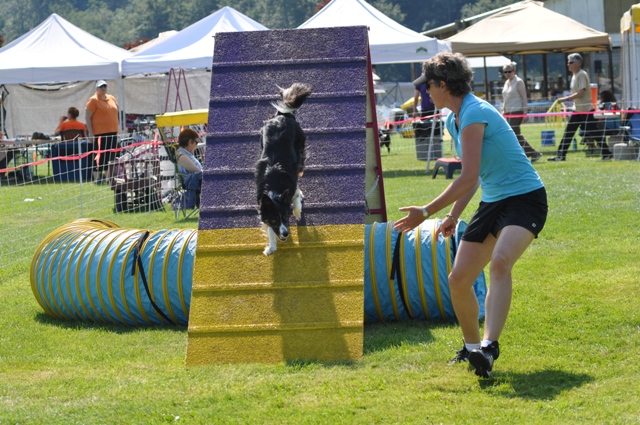 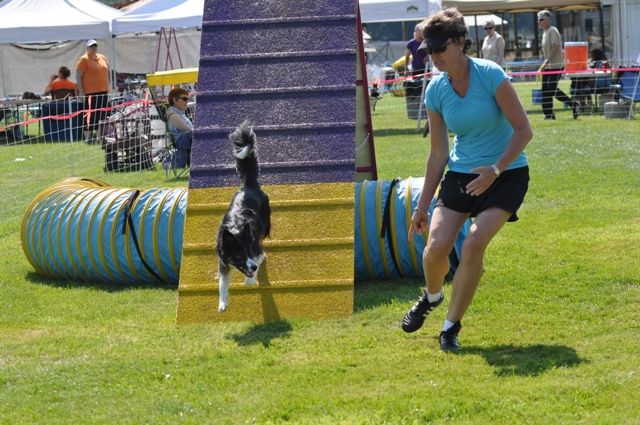 No images from Grand Prix itself but suffice it to say fear is a VERY powerful motivator and I got to the end of the DW before Ten to perform a similar maneuver. Not something I like to do on the DW since I think it's counterproductive to what I ultimately want, but hey, it led to this photo (thanks to Carol Carlisle for the image). :-) 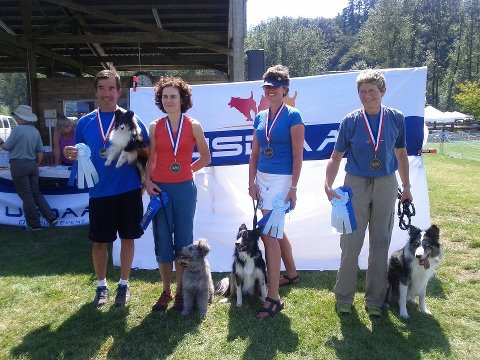 Yep, we are in sunny CA once again. I really do love it down here, though it's a tough place to live on a full time basis.

I have extended my happy sunburn to my legs, so even if nothing else went or goes well, I evened out my tan. Yay!

Barjor and I are traveling together in Stella; four dogs (at one time six dogs), a cat, plus two perimenopausal middle aged women. Any guesses to who comes out alive? So far Ten has tried to kill Meri (no damage), I have had a sudden system reboot and had to sleep NOW, and Barjor has spilled precious beer. Overall though, so far so good.

We went to a USDAA show this weekend. Saturday was a total washout with Ten. I suppose we are not really so consistent, but a whole day of bombs is always a good lesson in humility. Of course, Ky was nearly perfect on the same day, so the value of the lesson may have been a bit diluted.

Interesting group at the show. Not a lot of super competitive teams that we don't already see in the PNW. Apparently a lot of the high profile locals were in Dixon doing AKC.

Which I'm sure helped Ky take home the Steeplechase bacon. :-) That $40 will move Stella about 100 miles. Stockton, here we come!

Ky finished her MAD this weekend. Ten is not even close. She has yet to get a gamble (sticky!), and, oh, pesky standard . . . I think maybe she has one Masters Standard Q. I do love USDAA, but I do also seem to suck at it.

Both girls got GP Qs. Ten took the bye with a VERY conservative awkward run, and Ky was on her tail with a pretty aggressive run. Which in my mind was flawless, but hey, it's a happy flawless place in here, so video may (sigh) show otherwise.

Today we are kickin back and hanging out. I haven't quite reached the critical "get out of PJs mass."

Tomorrow up to Power Paws in San Jose for some small group lesson work with friends. Should be fun!

Random "hey, it's nice out and my puppy is unrecorded" shots. Me and the camera - not so impressive. I look at some of Heather's photos and go "holy shit, how does she do that."

Maybe not by being igorant and pressing the button in "auto" mode. I look up from my keyboard. Ky has one of my brand new cones in her mouth doing bucking laps around Rave who is standing on top of a tunnel. NO NO NO.

GOD THEY ARE CUTE!

I can't really correct this . . . I'll just buy more cones (and one suspects more tunnels when Rave gets a little bigger).

Sunburn. Awesome! (Note: this is NOT sarcasm.)

Turns out this has nothing to do with three BCs, but since I have three BCs and I was thinking about too hot and too cold . . . well, there it went.

It is a lot more difficult to see our own bad habits, I think. Or, good habits, as the case may be.

It also seems difficult for close friends to see our bad habits - or perhaps they are such close friends they have fallen into the same patterns as we have and can see no better than we see ourselves. There are also "fans" - fans will never tell you the bad, they will only compliment you for the good. Sometimes they will also compliment you for the bad. Is there a number of times any one of us can hear that our shit is really shinola before we start to believe?

I don't know that I have any answers. I have been on a quest to find the things that I need to be working on and it has taken me to videos. If I repeatedly have the same fault I have to ask myself, what about my training is creating this fault?

Have I rewarded with thrown toys so much that my dogs are not longer very interested in working close to me because the rewards are never close to me?

What about too much close work? Is my dog rewarded at my side so often that he will never go seek out an obstacle because there will not be a reward independent of my body?

Whatever I do most, I need to be sure I also pair with what I do least. Which is usually what is also LEAST natural to me to do.

Here's a video that might or might not have anything to do with the above. Frankly, I can't tell. One thing I can tell - it's freakin' wet and could have been dangerous.

Finished up Ky's last QQ for Nationals today, and her last "crazy 8" legs for WTT.

No more AKC for us this year. All USDAA from now until USDAA Nationals, then off until we start the cycle over this winter.

I am super proud of the girls. I ran them in really horrible conditions (think EO 2010 . . . ) and they were both SO SANE about it. Good, good dogs.

I really appreciate having dogs that have a sense of self preservation. I tried very very hard to make sure they knew where they were going so they could arrange themselves appropriately and I felt they did a fabulous job.

Tomorrow I will resume being amazing.